One of the things that connects me most to winemaking at a small family owned winery like Calcareous is the handmade nature of the product. All work done on the vines is done by hand. The fruit is hand picked. And in the winery during crush, the wine making here is defintely hands on. Which all comes to mind this time of year when meeting with the salespeople and coopers from the cooperages that make the barrels we use. Although for simplicity reasons we often categorize the oak used in wine making as French, American or European, reality is much more interesting than that. After all, do we just lump in all grapes as being either French, Spanish or Italian?
Making barrels is just as much an ancient artisian craft as wine making. Each barrel is hand made and toasted by some one with oak staves, steel hoops, a hammer, and a fire pit in the ground. The way the flavors of the barrel integrate with the wine and the life the wine lives while aging are much more influenced by the person who made that barrel than by just where the tree was grown. In recent years, the barrels of Tonnellerie Meyrieux have become one of my favorites and used in both my Rhone and Bordeaux programs. There might even be an expansion into the world of Pinot Noir.
If you are ever on a cellar tour and see this logo, you can impress the tour leader and fellow "tourists" (is that the proper word?) with the question "So how do you feel the powerful Meyrieux (pronounced May-Roo) barrels impact the wines made here?" 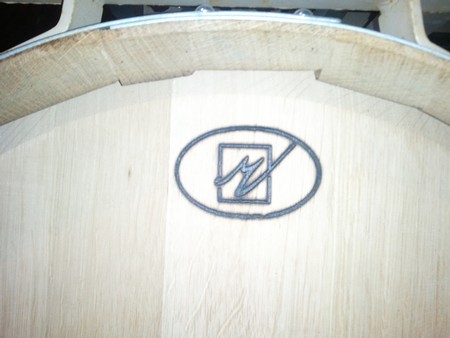 Powerful is the key word here. From 2007-2009 these barrels were only allowed to interact with Syrah, the power king of West Side Paso Robles. The method used for toasting these barrels produced wonderful flavors that softness to powerful wines like no other barrel I have ever used. As you can see here, the "House Toast", basically the toast the cooper feels is the best expression of their barrel, is made with Syrah in mind. 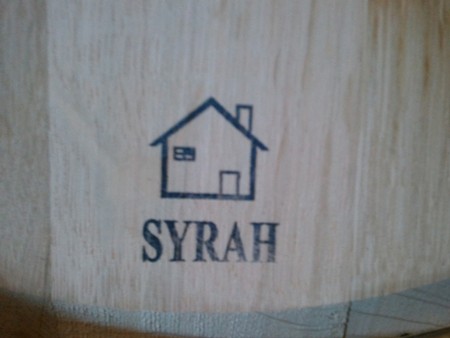 A house with the word Syrah is a foolproof way to tell the sleep deprived english speaking wine maker what to do with this barrel. Last year, after talking with the cooper and requesting a special lower temperature, longer timed toasting regiment, these barrels moved into Cabernet, Merlot and Petit Verdot. And after tasting through the barrels with him this past week, we were both very pleased with the outcome. This year he even had a new brazier designed that will allow an even milder yet deeper toast to the barrel.

This has led me to expectation of expanding the Meryrieux usage out to other varietals. Cab Franc, Pinot Noir (Meyrieux is located in Villers-La-Faye France after all), maybe even get crazy and put some Marsanne in one. We'll see. But one can not underestimate the importance of tailoring your barrel program to your wine making. And remember to thank the word's hard working artisan barrel makers the next time you taste perfect aging and oak integration in your glass.

Bill Luby
@ Mar 16, 2011 at 7:02 PM
http://vixandmore.blogspot.com/
Jason, just a quick note to let you know that I just stumbled on your blog here and enjoyed it a great deal. You seem to have found your voice right off the bat. Maybe it's a Jason + Paso + wine thing...

More importantly, kudos for an excellent batch of wines I tasted a couple of weeks ago. While all of them were good, the one that particularly stuck out was the 08 Grenache/Mourvedre, which may have just been opened up for the tasting room for the first time on the day I sampled it, in the excellent company of Dana and Christy. An exceptional effort!

Finally, you might give some thought to making this site available on in a feed for those of us who do most of our reading through a feed reader.

Looking forward to more wine (I must have just missed the 08 Mourvedre, but I was delighted to find some at Artisans) and more posts.

Jason
@ Mar 18, 2011 at 9:23 AM
Thanks Bill. I'm new to all this, I'm learning on the go. Thanks to your suggestion I now know what RSS is and what it means to "burn your feed". So I'm feeling pretty good about that. Hopefully I did everything right and now you can get chalk talk via a feed reader.

cheers right back at you -Jason