Some of my favorite quotes about wine making in America go back to almost the very beggining.  In Andrew S Fuller's 1867 classic "The Grape Culturist",  an early treastie on grape growing in America, his disdain for wine is barely veilded.  One that warms my heart is, "For my own part, I could never understand my wine making had anything more to do with grape culture as whisky making had to do with growing corn."  But the one that rings really true and I feel should be foundational to every wine maker is , "It is not every one who attempts to make wine that accomplishes it; for every vineyardist does not know how to make wine any more than every wine maker knows how to grow grapes."  You will often find wine makers talk about farming, but their soft hands and clean cuticles betray them, so please take what follows with a grain of salt as I don't pretend to be a farmer, but I've learned a few things worth sharing.

Quite a few years back, I was in a small bar on New Year's Eve overly enjoying the night while being entertained by a bunch of friends and thier one night only formations of Fleetwood Mac and Rolling Stones tribute bands.  Since these were one off shows, the song books was limited to mainly the big hits, but that didn't stop me from around mdnight repeatedly demanding my favorite Stones song "Shattered" be played.  It came to not avail, but that night and that song always pop into my mind while walking around our Estate Grenache in late spring.  Grenache has quite a few quirks that make it stick out in the world of viticulture.  Some of these are grape clusters the size of your head.  The fact that sunshine acutally makes the grapes skins lose color.  But the one that makes things most exciting is its propensity to shatter.

Like I said, I'm not the most viticulturally knowledgable person out there, and I can't truly speak for Grenache, but I think I like its approach to the grape game.  Some vines are perfectionists (looking at you Pinot Noir) and seem toconcentrate on producing just a small amount of these beautiful tight little clusters of berries.  Like a parent with an one child that devotes all thier attention to.  Not Grenache, it seems to go more with the all in approach.  Just produce as many flowers as possible and who cares if most of them don't make it, enough will to keep things moving.  Thus the giant clusters and the shatter.  Shatter is the failure of the flower to properly polinate, so it shrivels on the vine and never becomes a grape.  Here is an amatuer photo I took this morning of a post shatter cluster. 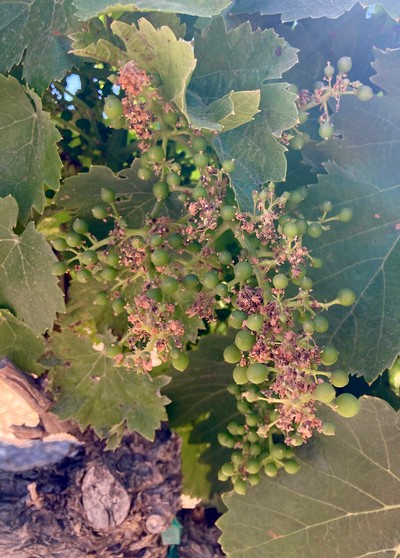 All that brown you see are the shattered dreams of a flower that never will grow to be a grape.  Yes, I know, it can be a bit sad, and let me tell you, it can get really sad some years as you can lose around 80% of your crop to a heatwave or cold snap during flowering.  But this year, the spring temperatures were extremely mild and created an atmosphere that was perfect for Grenache flower pollination, so only about 3-5% of the clusters look like that.  The vast majority of the clusters look like this after fruit set.

Those little green berries will swell a bit more each day leading toward veraison, the final step of the ripening process.  When all is said in done, this looks to be a pretty big yield of Grenache coming.  That is always exciting, as having excess availability of Estate Grenache opens up the possibility of picking a decent amount of it early for whole cluster pressing and forming a more perfect base for our Estate Vin Gris (and maybe even the Harvest Rose).  Of course that all reamains to be seen as it looks to be around 105 here 5 days from now so you never know what nature has in store.  But so far, things are looking promising for Grenache in 2021.