One of the challenges of working with a newly producing vineyard is that is takes you quite a few vintages to figure out your barrel program.  Winemakers will all have favorite barrels that are kind of their go to options,  but until you get to really know the fruit the vineyard is producing, it's mainly guess work.  Different barrels will add different features to the overall experience of the wine.  Suffice to say, some barrels you smell and taste in the wine.  Other barrels you only feel.  And only developing that first hand knowledge of what the fruit from a vineyard needs will allow you to have a successful barrel program.

To begin this post in another way, experimentation with barrels is still the name of the game here at Calcareous.  A barrel that I brought in for the first time in 2010 was Keystone Cooperage.  I had asked around few other winemakers in Paso and gotten positive feedback about Keystone.  Solid barrel for Cabs, Syrahs, and Zins was the general consensus.  That can be a bit scary though because those are the big boy wines and are capable of hiding barrel character.  I often talk about how early American coopers made oak barrels for things like salt pork and whiskey.  Nobody cares if there's a bit of woody flavor in those things.  I mean, throw down a shot of Old Potrero and impress the crowd by saying "Oh that's really smooth but the oak finish really overpowers there."  Um, probably not going to happen.  You need all the smoke and wood possible to stand up to the huge flavors in whiskey, so the barrels can be monsters.  Thus American barrels had a bad reputation because Chardonnay can, at times, be a bit more restrained then rye.  Luckily things have changed.

To prove the point, let's decipher all the letters and numbers on that barrel head.  First the cooperage stamp is rather self explanatory. Nice little oak leaf and acorn design there I must say.  Next, most American barrels will now tell you where trees were grown.  The climate that the forrest grows in determines the grain structure of the wood.  Warm regions produce faster growth and wider grain.  Cold forests have shorter growing seasons thus tighter grain.  And when it come to American White Oak, there is a big range of where it grows. 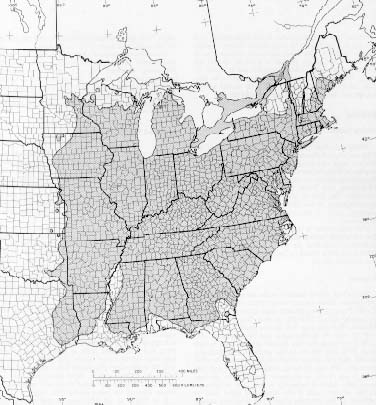 From East Texas to Maine the great Quercus alba forest covers nearly a third of the country. Keystone is Pennsylvania only, thus you generally get medium to tight grain wood in their barrels.  That is what the "TG" stands for, "tight grain".  Not to produce a full tome on oak here, but generally the tighter the grain, the slower the extraction from the barrel will be.

The letters "ML" indicate the toasting level.  In this case "ML" means "medium long".  I requested this toasting style which is a lower heat for a longer time.  A medium toast will give you more oak structure instead of the smoke and caramel you get from the toasting process.  Again, that is a decision you need to make based on what you feel the wine from your vineyard needs.  Also, when working with a barrel for the first time, I like to try and taste the wood not the toast.  The toast can be fined tuned, the wood is the wood.  The longer time of the toast gives you a deeper penetration into the wood.  Thus if the wine is in the barrel for 18 months, the toast is deep enough to prevent the wine from interacting with un-toasted wood.  The "TH" is another toasting indicator, meaning "toasted heads"  The heads account for a significant amount of the surface area of the barrel, thus toasting the head as well is an important step if you want to control the impact of the barrel.

Lastly is "3Y" which means "three years" of wood aging. Once the trees get turned into stave logs at the mill, they sit outside.  Two years is the basic time your average cooperage will allow the wood to age outside.  The longer the wood is exposed to the sun, wind and rain, the milder the "oakiness" becomes.  This is one of those "aha" things the French had to explain about how to make barrels for wine instead of whaling ship rum.  Thus, with American oak that can be a bit more powerful than French oak, I prefer a full 3 years of weathering.  It costs a bit more, because the stave mill needs to have the oak sitting around for an extra year before selling it, but for me it is worth it.

The last thing about these barrels that you can't see here is that they are a slightly larger size.  I order these barrels in the 265 liter size.  The normal French barrel size is between 225/228 liters depending on the shape.  By having a larger barrel, you decrease the surface area to volume ratio, thus producing a situation with less extraction.

This month, finishing my initial tasting trials for these barrels, I have been pleased.  I think Keystone will be with us for a while.  If you stop by the winery, look me up and you can taste for yourself.

Al
@ Apr 14, 2011 at 10:52 AM
Wow...thanks for the explanation. I have always wondered what those letters and numbers meant on the barrels. Great posts, btw - enjoy reading them.

Stephen Pokowicz
@ Apr 30, 2012 at 10:25 AM
I am home winemaker and have always bought used barrels. The best was a three year french oak out of CA. I wanted to buy one from keystone cooperage. What do recommend for a mixture of barbera, syrah and grenache. I want a slight hint of oak flavor.