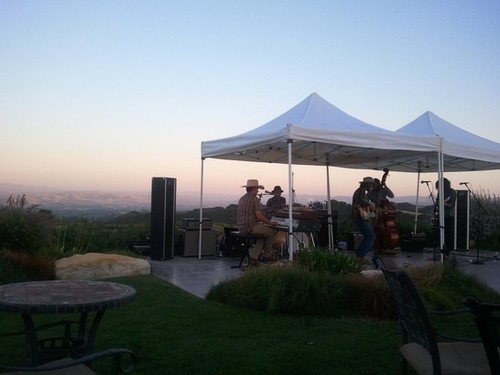 This time of year, with the visible signs of the vintage making themselves plain as day on the vines, you hear the same question over and over. "So how are your vines coming along, you behind?" This is one of those questions that, (yeah I know, it's just a conversation starter really), I never really know how to answer. Much like when I'm asked by tasters, "What's YOUR favorite wine of all these?” Maybe it's just my science background, but the rules of physics prevent me from answering. How does one come to a static conclusion dealing with such dynamic qualities? My favorite wine is the one that tastes the best. The problem exists that what tastes best is dependent upon parameters outside of the winemaker's or even the wine itself’s control. Not to get too 60's here, but wine is in the class of things that are completely influenced by set and setting.
This all applies to the timing of the vintage. On one hand you have an entire line of thought on the importance of vintage and how the yearly variance of wine corresponds with the unique environmental elements that produced it. Then you have the question of late or early, as if vintage was something to be avoided. I think there is the constant disconnect between the agrarian ideal that attracts people to wine, and the agrarian reality that one must comprehend to make wine. There are no concrete forms when it comes to farming, only chalky outlines meant to be blurred or redrawn on the fly.  In all honesty, I think Gandalf the Grey said it best.  I'll spare you my divulgence into the history of Wizards as propagated by the Druidic cultures of Northen Europe and their ritualistic role in the ensuring of successful harvests.  But an important note to take from that little clip is that definitive bold proclamations made about wine should always be followed by laughter.  Anyone who produces an air of stern seriousness when discussing wine is a fool.
Sure this does not really apply to large wine factories that impose modern economic models of supply and demand upon our cherished little beverage. In that world, early and late begin to exist in some context that needs to be obeyed. But the goal of Calcareous, the reason for our existence actually, is an attempt to escape that context. To exist and create in a space where the only concerns are quality, honesty, and inviting others to share our wine and escape as well.  So don't fret about early or late harvests in 2011, just know that the 2011 vintage will exist.  And it will be exactly as good as it is meant to be.