About 5 years ago, I was living on Capp and 21st in the Mission District of San Francisco. Ah the days of living post collegiate hipster lifestyle non-sense. Vegan burritos at Papalote. Buying the new Six Organs of Admittance record at Aquarious. Tweaking my Italian single speed commuter with help from Freewheel. And of course, getting a freshly pressed cup from Ritual Roasters. It was the closest coffee to my house, so an easy stumble after your typical late night. But, as much as I loved my press pot coffee from Ritual, there were days when a ride over to Philz for a hand poured cup was more the flavor I was looking for.
Today as a wine maker in Paso Robles this all came flooding back to me as I was tasting through the 2010 wines for the first time. The difference in flavors from the exact same fruit that was produced by punching down or by pumping over during harvest was amazing. So I decided to do a little experiment that might explain these wine making styles in a way a bit more familiar to most people. Friday morning was 2009 Zinfandel blending trial day. Spending the morning tasting multiple samples of Paso Robles Zin can lead to nap time real fast. So to wake everyone back up, coffee was called for.
The winery lab became a coffee brewing lab for the day. I wanted to see if making coffee with a press pot and a pour over would produce similar differences as do punch-down wines and pump-over wines. Plus I'd throw in a baseline cup made from Costco's finest just to make things a bit more fun and prove that care and good decisions in the vineyard and winery really do matter.
First the the baseline cup, which would be the "factory" wine style. Machine harvested, huge fermenters, all about high through put and low price. These are your $10 and lower bottles, or your gas station coffees. Auto-drip of course, because hand punching down 500 tons of fruit can be a bit tough.  It will be represented by a 2 month old can of pre-ground dark roasted Costco pure Columbian "Supremo" (must be Spanish for really good eh?) I raided from the winery kitchen. Juan Valdez on there speaks to the authenticity. 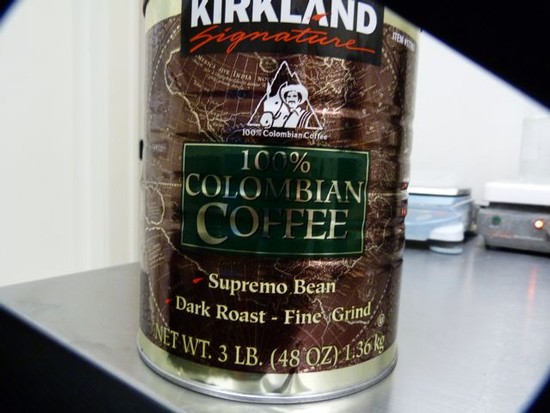 The contenders will be a Bodum press pot, which will represent the punch down method of winemaking.

And in the other corner, a Chemex pour-over, because pour-over and pump-over are almost the same thing. At least when you say them. 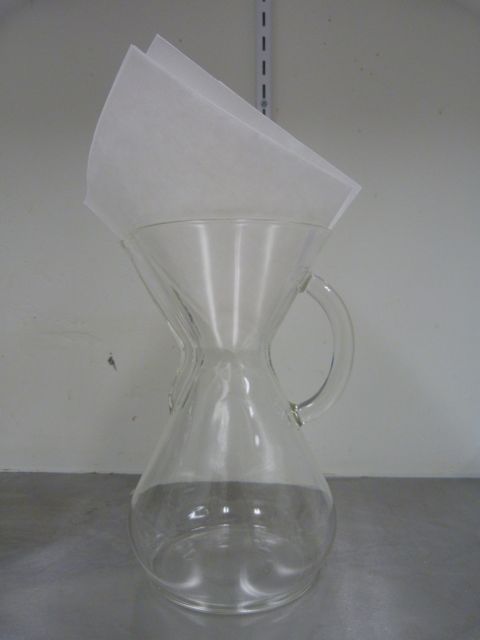 For our more barista approved brewing methods, we'll be using a Guatemalan coffee from Four Barrel in San Francisco. Purveryours of fine fresh roasts and also where I scored the Chemex for a super deal!

As you can see, this is a much lighter roast than the Costco stuff.  First a close up of the DARK roasted supremo. 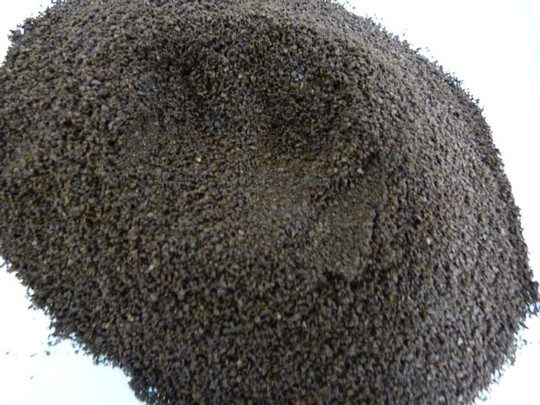 To keep things scientific, we will use 800 ml of water to go along with that 53.39 grams of coffee for each of the three methods. The Black and Decker will heat water by itself, to an impressive 154 F. Since my hopes for the baseline cup are next to nil, the pure science will leave that brew behind. The other two methods will get heated up to the recommended 197 F.  Of course using a hot plate and stir bar for even accurate heating.

So rough grind, into the press-pot and in goes the water. A quick stir and 4 minutes later, the press. 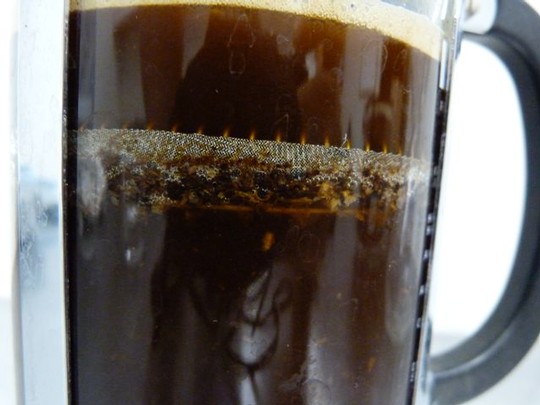 Our "pump-over" coffee gets a slightly finer grind and a once over with the water. 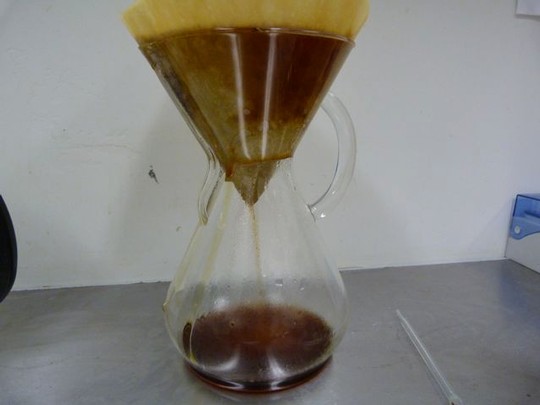 Time for the results. Here are the three brews properly displayed in Pyrex beakers for that lab look and feel. The dark roasted Columbian is the darkest as you would expect. But what is amazing is the color difference in the press-pot in the middle and the pour-over on the right. 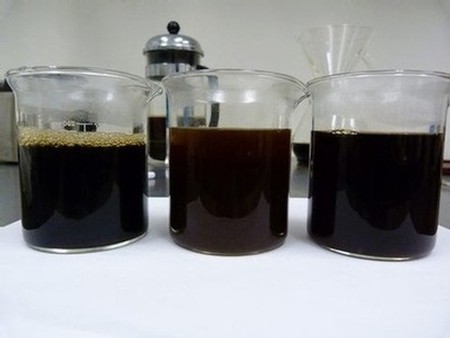 I was impressed by how this pretty much confirms the convention in winemaking. The use of punch downs is considered a much more gentle treatment of the fruit. Pumping the must over the top of the skins is more extractive. You will get deeper color and more tannins that way. Which sounds great, but sometimes these can overpower the fruit. Thus punch downs are preffered when your are looking to emphasize complexity and nuance as opposed to power. As far as the coffee goes, it was amazing how harsh and bitter the Costco cup was. It required some cream and sugar to choke down. Another great analogy to wine as under-ripe and over-extracted wines are often left with a bit of residual sugar because it hides the bitterness. Whereas properly ripened fruit, like properly roasted coffee, produces all the wonderful full flavor with none of the harsh bitterness. I encourage you to try this at home. It is great practice in sensing bitter in what you drink. And also you will also teach your palette how sweetness hides the harsh flavors so you can call out wines that use that crutch.

To conclude, I wouldn't say always punch-down or always pump-over your wine.  They don't live in a better or worse type of world.  They produce different end products, and it is up to the wine maker to make the correct decision as to when to use the technique that will get the most out of the grapes, or in this case, the beans.

Mary
@ May 14, 2011 at 11:41 AM
http://www.calcareous.com/blog/A-Way-Too-Long-Analogy
Jason thanks for this piece and all the others - I learn something every time but this one was especially fun, covering two different worlds. BTW are you familiar with the Japanese slow-brew method which is catching on in some places in the U.S. including San Francisco? - see http://www.nytimes.com/2011/02/13/magazine/13Food-t-000.html?_r=1&ref=magazine. Is there a wine analogy? Thanks! Mary Also BTW I think the blog could use a little larger photo of the author . . .

Jason
@ May 16, 2011 at 10:57 AM
Oh there are more analogies than you can shake a stick at with coffee and wine! In that article they mainly talk about pour over coffee, but they also have a picture of the Hario Cold Water Coffee Dripper. It is a bit different because it is based upon extremely slow brewing with cold water instead of hot. This provides a different extraction profile because the separate compounds will dissolve into solution based on temperature of the water. With coffee, some of the harsher oils and acids will not solubilize in the cold water, thus producing a less bitter beverage. Anyway, this relates to wine making in our use of "Cold Soaks". When the grapes first arrive at the winery, they are put into tank and then kept chilled at about 40-45 degrees for 3-5 days. In theory, extracted compounds (tannins and anthocyanins) will stabilize differently in a cold aqueous solvent than in warm solvent that is 15% ethanol. While this makes sense to me in theory, I use cold soaks quite a bit, I can't fully back up those claims because I'm yet to read a well done study on the true effects of cold soaking.
Commenting has been turned off.